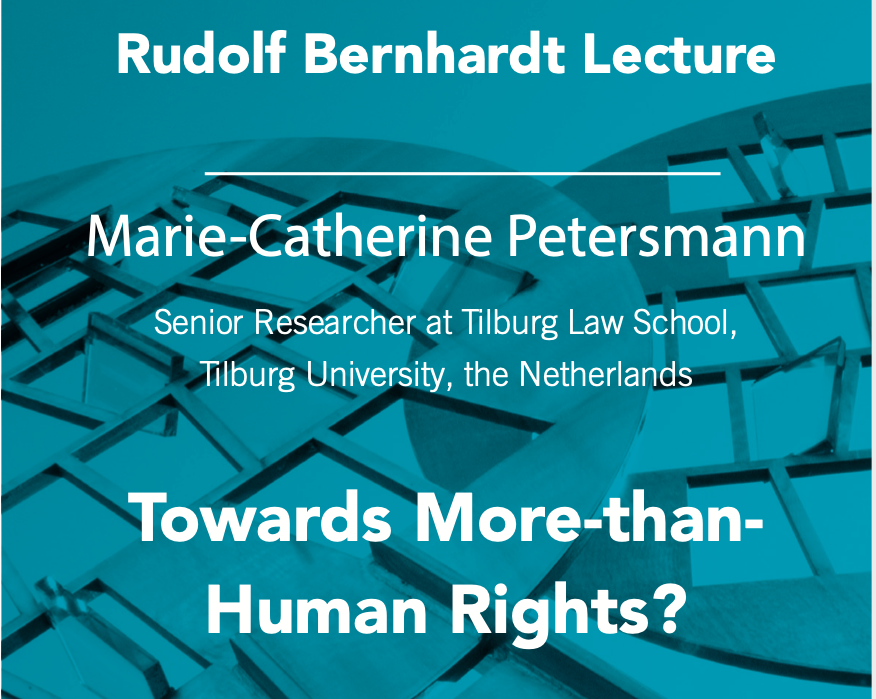 Funded by alumni, friends and former students of Rudolf Bernhardt on the occasion of his 90th birthday in 2015, the Rudolf Bernhardt Lecture honors the life and work of the institute’s director emeritus.

Marie Petersmann is a Senior Researcher at Tilburg Law School in the Netherlands. Her research focuses on how key co-ordinates of international environmental law must be reconfigured to make sense of entangled human-nonhuman relationalities. Her work lies at the intersection of legal theory, ecological philosophy and political ecology. Her current project on ‘Anthropocene Legalities: Reconfiguring Legal Relations with/in More-than-human Collectives’ is funded by the Dutch NWO. In 2022-2023, she will be a Fellow at the Istituto Svizzero in Rome to work with ecological activists on practices of ‘more-than-human commoning’. Marie holds a PhD and an LLM in International and European Law from the European University Institute in Florence and an MA in International Law from the Graduate Institute of International and Development Studies in Geneva. Her monograph, titled When Environmental Protection and Human Rights Collide: The Politics of Conflict Management by Regional Courts, is forthcoming with Cambridge University Press.

Among the many legacies left by Rudolf Bernhardt, the significance he attached to the doctrine of the ‘living instrument’ is crucial. Accordingly, the European Convention on Human Rights (ECHR) must be interpreted as evolving and dynamic – as a ‘living’ organism. In this lecture, I reflect on what it would mean to move from a ‘living constitution’ to a ‘constitution of the living’. To answer this question, I consider what constitutes ‘life’ itself – which forms of ‘life’ currently merit legal consideration and care. The argument unfolds in three steps, each tracing a different way in which the protection of ‘life’ is being (re)configured against the backdrop of ecological and climate change. The first part of the lecture is devoted to the ‘liberal response’, which calls for a recognition of a self-standing ‘human right to a healthy environment’ to safeguard human life. The second part of the lecture focuses on the ‘critical liberal response’, which advocates granting ‘rights to nature’ to better protect nonhuman life. Finally, I explore how the protection of ‘life’ might appear in feminist posthumanist, new materialist, and symbiotic understandings of ‘live-ability’. My objective here is not to propose a legal reform of the institutional functioning of the European Court of Human Rights, but to speculate about how this ‘living constitution’ could ‘constitute the living’ differently. If the metaphor of ‘life’ acts as a ruling device in the interpretation of the ECHR, only particular life-forms get protected, while others are eclipsed. I think with Bernhardt’s invitation to consider the ‘living’ nature of the ECHR instrument to reconceptualize the notion of ‘life’ that animates human rights theory and practice today.